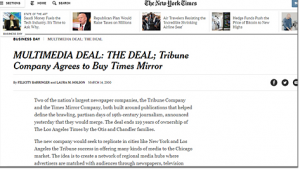 At Interzine we built the internet’s first mass-market sports enthusiast websites in iSki, iGolf, iBike, iRace and several others.

Two years later the group was sold to Times Mirror, the owners of the LA Times and dozens of print magazines. Our technology and content were repurposed across leading websites including Parenting, Popular Science, The Sporting News and others. (iRace became ESPN’s auto racing portal. iGolf became Golf Magazine’s portal.)

The entire magazine division, including their new interactive wing, was then sold to Tribune Media (TPCO). We became part of the empire that owns The Chicago Tribune, Baltimore Sun, Careerbuilder and the Chicago Cubs. 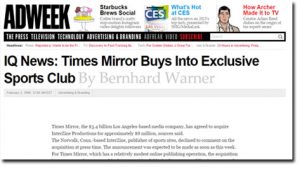 The publishing group was acquired by AOL Time Warner and fell under the Time, Inc. (now MDP) umbrella.

Avoiding a move to New York, we accepted an offer to work for Vail Resorts (MTN) to help rebuild their resort web portfolio. In 2002, we relaunched Vail.com, Beavercreek.com, Breckenridge.com, Keystone.com, SkiJob1.com, and Vailresorts.com.

Skinner Media was established in 2002 out of a desire to do exceptional work for select clients. You will be valued, and you will be treated fairly.

With 20 years in interactive media, we stand by our experience, design, and implementation of technology. We guarantee our work, no matter what your business needs may be.

Contact us for a free quote, or just to ask questions. Thanks for the visit.